Coming up soon: Brand new first ever Sh!t Theatre Podcast! 'London, New York, Edinburgh, Goole', a live, Yorkshire-based, minute-by-minute account of our trip to Goole. Not going to give anymore away, but stay tuned for that exciting step into the world of podcasting. Just as soon as we've edited the 27 separate audio files which - from what I've suffered through so far - mostly consist of us saying 'Goooooollle! GOOOOOOOOOOOOOOOOOLE!'
I say 'I've suffered through' because Louise has thus far, as she puts it, refused to 're-live the trauma'.


OTHER NEWS:
Sh!t Theatre on the Simpsons. So we auditioned and had a read-through to have a guest appearance on The Simpsons the other week. They decided it wouldn't work out; repeated uses of the word 'Shit'  and our constant references to the dead babies of political figures wasn't suitable. Still, we got Apu's autograph, and here's a photo of our audition: 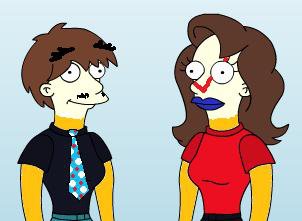