EDINBURGH
Hello! Here we are back from Edinburgh Fringe, veterans now in our fifth year and still no better at flyering. Lou's technique of wincing whilst placing our shitty flyer next to someone else's beer totally did not pay off, but as word got around of how amazing..ly free our show was, the Phoenix Bar in Leith started to fill up and we got some really good audiences and met some great locals. Lots of nice feedback as well, so thankyou everyone for coming & supporting us, next year we will be back! We rebelled this year and did not pay the £400 to go in the official brochure, which meant reviewers would not come to see us, but we felt it was the best show we have put together, and we gave ourselves a really good self-penned 5* review for it. We will hopefully be bringing it to London for those who missed out on the Fringe this year.


Recommendations on this year's free fringe:


'A Good Improv Show' FREE at Sin everyday!
An hour of long-form. We started off our illustrious careers with 'Streets of Rage' long-form improv in London, as led by the monumental Chris Chuang (Please check out his Cat Cards- http://catcards.tumblr.com/), and so we watched this pretty critically. Despite rumours of it being not good, we thought it was good, a Good Improv Show. Particularly enjoyed a group game involving Robert Mugabe and toothbrushes. However, we suggest re-naming it something hilarious like 'A Sh!t Improv Show'; it will lower audience's expectations, leading to many a fine comment of 'That was better than I expected!', and, 'You're never going to be on TV, are you?'! 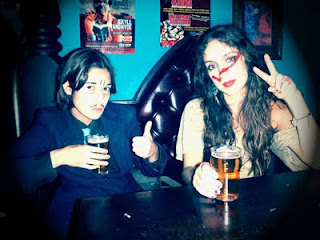 Here we are in Edinburgh.

LONDON
This Saturday we performed at Duckie at the RVT. Having been warned about the Duckie audience, we were more terrified than we have ever been before a show. However, it went really well, we had a great time, and the 300 pissed-up queers reacted well to our 'AIDS' opener. Thanks to Simon for having us and giving us advice, and we can't wait to go back! 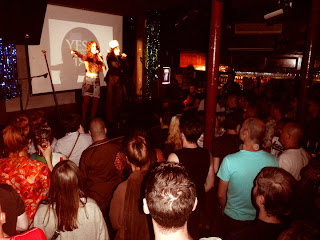 We survived the riots & the Edinburgh Fringe! We are back in town, more info coming soon, don't forget to come along to Duckie at the RVT this Saturday to see us do a something! yay! http://duckie.co.uk/clubnights.php?submenu=agenda&year=2011
Posted by Sh!tTheatre at Thursday, August 18, 2011 No comments:

We are Sh!t in bed

We found out after our show last night that it wasn't recorded, so you will just have to trust us when we say we received 5 standing ovations and someone passed out. (A fainter in the audience being the live art seal of approval).

Joking aside, Sh!t Theatre's (genuine) Performance Democracy -  featuring Tammy Why not? and US Political expert Claire Nolan -  went really well. The theatre at Dixon Place is a brilliant space and definitely the best we have had a chance to work in. We were hoping to have a recording but somewhere between our opening dead baby bit and our final cunt song, it turned out a camera wasn't actually available. Thus no proof exists that we ever performed at Dixon Place. But we did. Like a tree falling in an empty forest, we made a kind of thudding noise when we hit the ground. Louise thinks that makes it sound like we flopped, but we totally did not. It was a successful thud. Thanks to everyone who came along, and to Jo, Claire and Lois for making it happen!

SEE YOU IN EDINBURGH!
Posted by Sh!tTheatre at Thursday, August 04, 2011 No comments: