Just got back from Edinburgh last night so we're lacking sleep and perspective. How is everyone? What have you been doing? We missed you. This year at the Fringe I think we had what is known as a Good Run (?). We had people come to see the show with minimum begging, got some nice reviews and press and somehow got shortlisted for the Amnesty International Freedom of Expression Award which is an incredible (literally) honour. 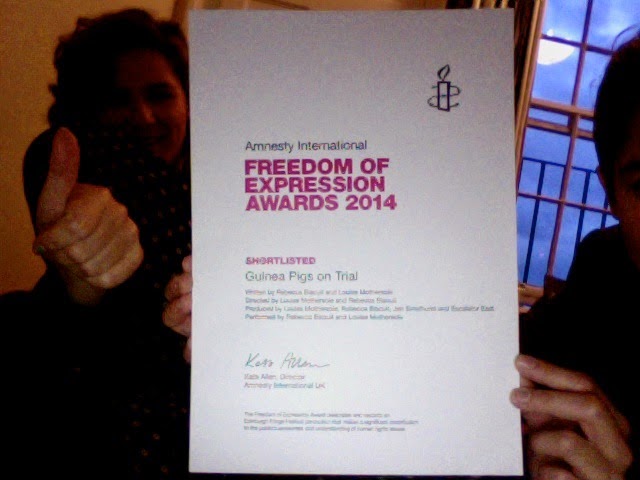 Here's some links to some write ups of the show ★★★★ OH oops there's some stars getting in the way of me typing, many apo★★★★logies.

Apparently it's now etiquette that you shouldn't re-tweet or blog about praise you receive, but I'm pretty sure you have to be able to pay your rent before that rule is enforced. Megalomania is part of our schtick so we're going to continue to go on about how brilliant we think we are until we're in the Guardian OH WAIT

Guinea Pigs write up in the Observer: http://www.theguardian.com/stage/2014/aug/17/horizontal-collaboration-light-ad-infinitum-guinea-pigs-on-trial-light

and here we are being described as 'uneven' by Lyn in her final week tips:
http://www.theguardian.com/stage/theatreblog/2014/aug/18/final-week-tips-theatre-edinburgh-festival

There seemed to be a trend this year of reviewers referring to female performers as 'girls'. We had many discussions of whether this was a bad thing or not, and came to the final conclusion that if you have been menstruating for over a decade and a half, you have earned the term 'woman'. However, will be using the quote 'a distinct lack of proper entertainment' on all our posters from now on.

The true story of how the plays’ protagonists, 2 unemployed students, were seduced by an advert in the job centre to participate in a drugs trial. Seeing an opportunity to top up their dole money and arts council funding, they applied….and were rejected….for perfectly sound medical reasons. But seething with anger from their perceived interpretation that the pharmaceutical industry is biased against women, they produced this vitriolic play, using a script partly written by maverick physician Dr Ben Goldacre. The majority of the piece is constructed using audio soundbites and selected text from Goldacre’s books and speeches. As a consequence, rather than being a balanced look at how the pharmaceutical industry tests new drugs, it comes across more like a science story in the Daily Mail – sensationalist, inaccurate, and biased. From a theatrical standpoint, the play benefits from the unusual surroundings of the Summerhall lecture theatre, but offers little else. Frankly, it came across as a rather silly student song and dance routine. But, as it says on the flyer, it is ‘Shit Theatre’.

The best thing about the Fringe this year was the number of shows we saw that we loved and were inspired by. By no means a full list, but these included:
Looking for Paul by Wunderbaum
The Christeene Machine by Christeene
You Are Not Alone by Kim Noble
Don Quixote by Little Soldiers
Show Off by Figs in Wigs (go QMUL)
Enter the Tonezone by Tony Law
Jessie Cave's work-in-progress
Near Gone by Two Destination Language
Hug by Verity Standen
Put Your Sweet Hand in Mine by Andy Field & Ira Brand
Mental by The Vacuum Cleaner
Lungs by Duncan MacMillan

prob missed a load of shows off that. But it really was a great year.