Hurray! We got more Arts Council funding! This means we will definitely be part of Escalator East to Edinburgh 2013, and we will be able to afford a place to sleep and actual flyers and food, which will be smashing. We're taking the re-write of Job Seekers Anonymous to the Fringe this year, and as part of the Escalator programme,will be producing audio description for the show and confirming a venue that is wheelchair accessible. And then we will be taking over the world.

- See some silly new material at Duckie this Saturday 2nd March @ the RVT. Also on the bill are Erin Hill & her psychedelic harp and Martin O'Brien and Sheree Rose. Our set features Shaggy and Pope Benedict XVI.

- See some silly old material at Luke & Michael's Chemistry Set this Sunday 3rd March @ the Wilmington Arms. Also on the bill are Luke & Michael doing some improv, probably about bears or swords, and Adam Oliver.
Posted by Sh!tTheatre at Tuesday, February 26, 2013 No comments: 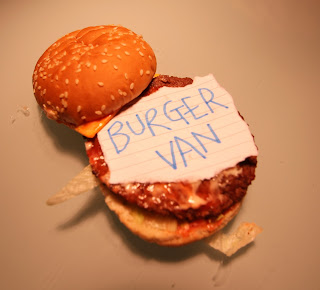 See Burger Van, a brand new collaboration between Sh!t Theatre and Tim Hopkins #TimOnABike #Copyright
at Camden People's Theatre this March as part of Sprint Festival 2013 (first exciting announcement). We will be showing the very first work-in-progress version of our play extravaganza at CPT before our residency at Battersea Arts Centre (second exciting announcement) in May/June as part of their Summer Cook Up season.

The play contains no jokes about horse meat. That may be because horse jokes are too easy, or because we haven't written the play yet. You can make your own assumptions as to which of those statements is true.


ALSO QUITE EXCITiNG
For fans of Sh!t Collaborations, you can see us and Phil O'Shea a.k.a Sh!t O'Shea doing a new little bit at Laugh Out London this Monday 18th at the Camden Head!