Not such a sh!t review

Here's a link to a nice review Everything Theatre wrote about our first Camden show last week at the Etcetera before it moved to CPT: http://everything-theatre.blogspot.co.uk/2013/01/job-seekers-anonymous-etcetera-theatre.html

We were not very happy with our performance that night, so it's good to know that the show still came across well. Note their excellent use of 'Booise' and the fact they refer to us as 'masters at setting a pace'. Nice to be called a Master of anything. Master of Bread. Master of Time. Master...of Death! Here's a note, I broke my wrist last week so I'm writing this on 60mg of codeine. Master...of Death!

February we will be working very hard on Burger Van, the play we are writing/devising with Tim Hopkins. We have secret exciting stuff to announce about that soon. Lou and I will also both be working at Peopling The Palace, the very last live art festival to be held at the People's Palace in Mile End before it goes corporate. Here's the promo image, see if you can tell what angle they've gone with RE the corporate pigs, man:

Come East and support art and people from the 17th Feb: http://www.airproject.qmul.ac.uk/

March - classic Sh!t Theatre back at Duckie @ the RVT on March 2nd and Tricity Vogue's Ukulele Cabaret on March 12th

April - we're trying out something new at First Thursday at the new Visual Collective studios (previously Press Play House) on Vyner Street. The first ever large-scale Sh!t Theatre installation will be taking over the space for the evening of Thurs 4th April, on the same theme as our Job Seekers Anonymous project


IMPROV
We're still at it people! Most Sundays at the Wilmington Arms, Farringdon, and see The New Happy Squad at Upshot Improv, Stockwell most Thursdays this February!
Posted by Sh!tTheatre at Thursday, January 31, 2013 No comments:


Here's a little promo video we made for our shows next week!
Posted by Sh!tTheatre at Saturday, January 12, 2013 No comments:

HELP for Shit Theatre: those of you who have already seen 'Job Seekers Anonymous' - could you leave a few lines in the comment section below about what the show made you think of in terms of the unemployment situation in the UK? Did you learn anything, or did it make you think about anything in particular, or did it change your view of unemployed people? Or, if you are unemployed, what did it make you think of? Did it fill you with despair? (despair is our main aim). (That's not true) This is for an application so any help much appreciated.
Alternatively you can email us your feedback, or leave a comment on our Sh!t Chat here:
http://www.shittheatre.co.uk/2/post/2012/05/were-sht-theatre-arent-we-grand-no-then-tell-us-why.html
Posted by Sh!tTheatre at Wednesday, January 09, 2013 No comments:

Happy New Year everyone! We're all very glad 2012 is over and that we're striding into 2013 poorer and unemployeder than ever before. I'm 25 next week and my arms have started clicking. I don't know what that means.

COMING UP IN JANUARY-
All very exciting, it's our mini Camden Run.
For your viewing pleasure, we are performing the brand new version of Sh!t Theatre present: Sh!t Theatre's JSA (Job Seekers Anonymous) 2013 at:


According to London's Calling. :  Pay Nothing Play Anything festival runs from January 8th to 27th, and features a host of acts from all walks of performance art. It received 104 applicants, from which only 12 were chosen to deliver. Most of the acts have been handed three nights each, with profits being split between the theatre and those on stage.
“Yes, I think it’s quite a nice idea,” says Charlotte, one of two of Etcetera’s leadership
To be honest, we have never paid to play anywhere, and never would, and their idea of a 'profit split' is pretty painful reading compared to other places we've played at . Still, we're very happy to be one of the 12, and it's a great little theatre right on Camden High Street, so hope to see some of you there!
TICKETS HERE: http://www.etceteratheatre.com/details.php?show_id=1418

We love CPT and are excited to be part of this festival which is a mix of stand ups doing theatre, theatre about stand up, and other stuff around that. Headlining is Rachel Mars (Louise is also the lighting designer for Rachel's show) and we are on a double-bill with John Luke Roberts who is also excellent. You can get a double-bill ticket for both shows for £15 (£10 conc), or just a ticket for us for £10 (£8 conc) which is cheaper than going to the cinema (Interesting fact).
TICKETS HERE: http://www.cptheatre.co.uk/event_details.php?sectionid=theatre&eventid=595&searchid=current 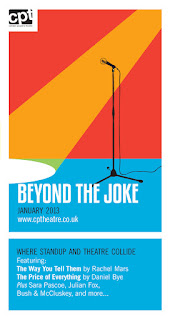 Improv
We're still at the Wilmington Arms most Sundays as part of London's only weekly long-form impro night! We are currently playing with two teams, Pilots and the New Happy Sqaud, as well as our Country & Western Trimprov with Matt Thomas, so come on down cowboys. And Indians.(not racist)