We've done 10 tweets now. Thankyou very much for all your enthusiastic support.

Thankyou also to Dave, Ed and Karim 'loyal fans' who came along to see us perform a somewhat limited set at The Boston Arms on Saturday. Their shouts of 'Judas!!' cheered us no end.


Coming up this week!
GOOLE
R:E: GOOLE: Gooooooooooooooooooooooooooooooooooooooooole!
All the big stars of the performance art/ political satire world play Goole sooner or later, and we are very excited to get on that train on Friday and head up North for 'MAYHEM IN THE MARKET', a festive evening of innovative art and extraordinary entertainment, featuring artists from around the UK creating work in response to Goole's market hall. GOOOOOOOOLE! We are playing at 10pm in Bar Absolut, which we assume has something to do with vodka. Or absolut ely shit thea tre. I will also be presenting What I Know About Wine So Far earlier on in the evening. Here's the Facebook event, Yorkshireists, come on down: https://www.facebook.com/events/224125007656587/
You may notice the Facebook event promises a thing called 'Mulled Glog', which we are also very excited about.

NEW ACT OF THE YEAR 2012
Stewart Lee won it in 1990, Kitson came second in 1998 (lord knows what you have to do to beat Kitson but someone did it) and in 2012 Sh!t Theatre will be at Rich Mix in Bethnal Green on December 6th for one of the first rounds of New Act of The Year 2012.
Unlike the Laughing Horse and the Amused Moose competitions, NAOTY is not decided by audience vote a.k.a, how many friends you have who aren't busy that night, so we don't expect hundreds of you guys to show up,but still, ten acts for a fiver on a Tuesday night in E2's not bad, so hopefully see you there!

Posted by Sh!tTheatre at Tuesday, November 22, 2011 No comments:

It's a Sh!t Up North Party Mark II next Friday night when we headline Drunken Chorus's one-day performance festival, Mayhem in the Market  in Goole,Yorkshire.
Here's the flyer for our Yorkshire-based friends: 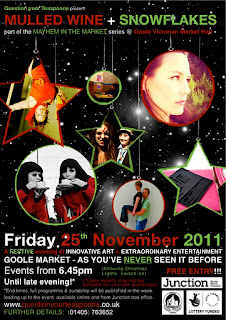 And here's a picture of Goole we found on Wikipedia: 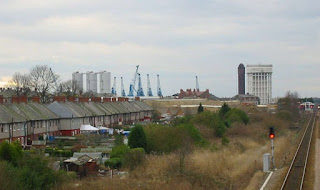 For you pansy Southerners, we are playing at a lovely benefit gig in Tufnell Park this Saturday (19th) at the Boston Arms, at some point between 10pm and 3am. Also featuring live bands and a barn dance, they are paying us in booze so come on down, we're sure to be in 'festive' spirits.
Posted by Sh!tTheatre at Wednesday, November 16, 2011 No comments:

Wine before. Wine after. Featuring Lois Weaver as Tammy Whynot?, our ex-impartial adjudicator. The show'll be about 1 hour and 15 minutes. 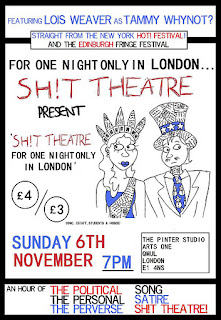 Look forward to seeing you there and comparing bonfire night burns with you!
Posted by Sh!tTheatre at Saturday, November 05, 2011 No comments:

Just to let you loyal fans know, our Facebook page is down. There are 254 people worse off today than they were yesterday morning. Awfully sorry, just trying to find out whether it is a technical issue or a complaint about our name. IF YOU'RE OUT THERE, LOYAL FANS, DON'T FORGET THAT WE ARE PERFORMING OUR ONLY FULL-LENGTH SHOW IN LONDON WITH LOIS WEAVER THIS SUNDAY 6TH. Tickets are available only on the door, so get there early to avoid massive disappointment.