TONIGHT! Sh!t Theatre are MCing the Official launch party of Press Play Films at the Press Play House on Vyner St. We'll be appearing throughout the night in steadily greater states of disarray (free booze) and we'll also be doing a half-hour set around 9.30pm. There'll also be lots of great bands and DJs allll night. It's an invite-only party but you can let us know at shittheatre@gmail.com if you'd like to come along. But quick! It's already 2.30pm.
THIS WEEK! Our London preview & club night Sh!t Theatre's JSA (Job Seekers Anonymous) + Office Party for the Unemployed is this Thursday at 8pm at Bethnal Green Working Mens Club! Tickets on the door are £6 (£4) concessions and we would really appreciate your faces and support.
IT'S OVER! Velela Pop-up Festival ended yesterday and despite the lack of sleep over the past fortnight, we are really going to miss all the awesome Phakama gang. We've never worked with such a lovely bunch of people and highly recommend you keep your eyes peeled for any upcoming Phakama projects at http://www.projectphakama.org/
Posted by Sh!tTheatre at Saturday, June 30, 2012 No comments:

Hello from two of the Official (ish) Top 60 Funniest Women in the UK Discounting All Those Who Didn't Enter The Funny Women Contest!
Basically, we're in the semi-finals on 13th August whilst we're up in Edinburgh at Assembly George Square in the Bosco Comedy Tent at 2pm. Also the same day as our first show at the Phoenix! You can check out our Ed Fringe info here:
http://www.edfringe.com/whats-on/cabaret/sh-t-theatre-present-sh-t-theatre-s-jsa-job-seekers-anonymous-1
and here for the second week at the Counting House:
http://www.edfringe.com/whats-on/cabaret/sh-t-theatre-present-sh-t-theatre-s-jsa-job-seekers-anonymous
and if you want to check us out in the non-cyber programme, go to page 18 (Cabaret Section). This information is useful as the page number tells you where our programme entry is. Unfortunately our page number is not listed in the programme index which will be good as it will keep away all our stalkers and crazed fans and nobody will be able to find out where we're playing.
(Ed Fringe made that small printing mistake and we are in no way angry or upset or engaged in a bitter back-and-forth email exchange with the marketing department).

Party Time
Sh!t Theatre's London previews + Office Party for the Unemployed are coming up real soon at Bethnal Green Working Mens Club. Here's the Facebook link:
https://www.facebook.com/events/402149919837085/
and info on the Working Mens Club website:
http://www.workersplaytime.net/WEEKAFTER.htm
We'd really love to see you there! Confirmed on the decks for 5th July is Lewis Church from the Church of Soul playing terrible office party tunes, soul, funk and 50s classics. Here's a link to his blog so you can check out what he's up to in the live art world/ his penis http://lewischurch.blogspot.co.uk/


AGLOW
Last week we had our first workshop with the Association of Greater London Older Women as part of our JSA project. For the first half of the workshop, we introduced them to the basics of long-form improv, played some improv games and tried out some 3 line scenes. Two of the women, Jo and Marge, came up with the most perfect 3 line scene we've heard whilst simultaneously breaking a load of improv rules. They were given the word 'hairdresser' and it went like this:

(Marge enters)
Jo: How do you want it?
Marge: long
Jo: What are you doing here then?
End Scene.


The second half of the workshop was a discussion about (un)employment. The women have all worked, legally and illegally, in factories and offices, as psychotherapists and seamstresses and social workers and building those little caps that go on the top of clicky pens, and many have signed on, throughout the last 50-60 years. We learnt a lot and had a lot of fun, and the workshop was a fantastic addition to our JSA project. We're scheduling another one for August/ September, and will be back in the studio at the beginning of July to see how their experiences will influence our writing.


Phakama
We're working all this month on Valela Pop-Up Festival in and around QMUL in Mile End. There are shows every night and tickets are only £3 online (£5 on the door) so head East and come say hi, particularly to Lou as she is Technical Manager a.k.a the only technician for the whole festival and will need a beer afterwards.

This week's Sh!t:
-Tomorrow (Tues) is our thrice re-arranged Funny Women Awards show, plus a completely different trimprov gig with Juliet Stephens, both happening in and around Covent Garden. It'll be like that TV programme where thingy has to run around and go back in time and stuff to fit in having two girlfriends: hilarious! Check our Facebook for locations & times.

-Thursday is our first workshop with AGLOW (Association of Greater London Older Women) for our Job Seekers Anonymous project. We'll be working on some improv with them and also discussing/ debating their personal job history and opinions on or experiences of claiming benefits. We'll then be back in the studio, re-visiting our 'JSA'  in light of the workshop and the post-show talk we had after our preview at PULSE Fringe.

-Friday we're gigging somewhere...and that somewhere is...somewhere we can get a...tube...to?

Going to let you in on a secret here - I don't actually know where the gig is.


-From Saturday we start work as Technical Manager (Louise) and the less skill-requiring Participant Manager (me) at Phakama Pop-up Festival, which finishes at the end of June when we begin nossa trabalho as artist assistants for Rio Occupation London.  They're both going to be great festivals of new and exciting performance, art and film from international artists so we will keep you updated on what's going on throughout the summer.

-This Sunday, Problem Child are back at The Wilmington Arms with more long-form improv!

-Today we confirmed a nice little residency at the Basement, Brighton (see our famous 'Favourite Venues in the South East' list) for September, and a performance of our JSA at Colchester Arts Centre, also in September. We'll be re-evaluating/ re-writing our JSA after the summer so the Basement will be a great place to do that, and Colchester Arts Centre will be an equally great place to try it out.


-ALSO COMING UP - HEY YOU GUYS you like to make party, right? Well we make party! Sh!t party! FOR: Job seekers/ signers on/ bums/ unemployeds/ unemployables/ the general public at Bethnal Green Working Mens Club not once but TWICE this July. Put the 5th and the 26th (both Thursdays) in your diaries for Sh!t Theatre present: Sh!t Theatre's JSA (Job Seekers Anonymous) + Office Party for the Unemployed.
Come see our new show and club night at the Working Mens Club this Summer. Are you unemployed? Missing out on the 'fun' of the office party? Well feel left out no more, with Sh!t Theatre's Office Party For the Unemployed. (official) (copyright). More info coming soon, but expect the London premier of our new hour-long show, bad party games, terrible dancing and mild sexual harassment from the middle-management.

(P.S if anyone has a photocopier we can borrow/have/swap for something we own, please email shittheatre@gmail.com)
Posted by Sh!tTheatre at Monday, June 11, 2012 No comments:


We survived our preview at PULSE Fringe this week! Had a great time at the New Wolsey Studio which is a lovely venue and we highly recommend it, plus they have this dog that has a sore paw in a bandage, just walking around the place.
The piece was pretty messy and definitely a first draft, but we've had some really nice reviews and here they are (links take you to the full reviews):


Both Glen Pearce for www.thepublicreviews.com and Paul Couch for www.whatsonstage.com describe us as either 'gloriously' or 'wonderfully' political incorrect, which is something we need to think about if this is indeed how we come across. Despite being framed in this context as a compliment, we want to say that we try and make a point of discussing difficult issues without actually being politically incorrect or rude or whatevs. Our Burqa King piece, for example, is about censorship and the discussion of polemic issues, and we say during the piece that we believe in discussion/debate, women's rights, religious freedom and freedom of speech. Our Election Song is a satire of how the media evaluate politicians in the public eye; how their personal lives are discussed and analysed more than their policies. We do talk about dead babies, yes, but it's fact, not subjective judgement. Whether we should even mention facts like that, however, is up for debate and we encourage you to tell us your opinion. Leave comments here or on our Sh!t Chat on our website. But we say: Political correctness is a good thing guys! Yay, we love being nice to people! Sh!t Theatre R 4 PLTICL CRCTNESSS YAY.


In that vein: we're on tonight at the Funny Women Awards. Ha! Funny Women! Great joke guys, here come the menstruation stories. It's an infamous competition as it's pay(not much)-to-play but we'll see how it goes, and we're going to do Burqa King. That's at the Green Carnation, Soho, 7.30pm.


Tomorrow (Sat 2nd June) it's Sh!t Theatre as Pizza, Paul and Mary, the UK Peter, Paul and Mary Tribute act at 'Stars and Their Pies', Stoke Newington International Airport.  Come see Louise in a wig and me with a beard.

Sunday 3rd June we're back at the Wilmo with Problem Child for some long-form improv!


Hay On Wye and Isle Of Dogs

Still not much more info on this, but: see Sh!t Theatre in Wales in August at the Globe in Hay on Wye, and see a run of our JSA at The Space, Isle of Dogs in November!


To round off this special Jubilee post, here's a new pic of us by David & Helen at Press Play Films (put together by Louise): 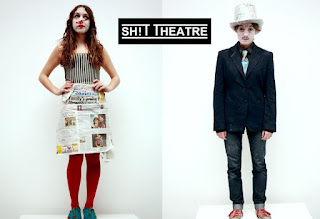