This is a blog entry. Not an excuse to make the plumber think I have a Real Job. Look at me typing and frowning. I hope he hasn't noticed that I am wearing pyjamas. So seeing as this is definitely a blog entry, here is some blogging:


DOGS
Our run at the Space finished a week or so ago, and all in all we were very happy with it. The venue is on the Isle of Dogs or as it is known on the streets, the Isle of Bum Fuck Nowhere, and so the audience numbers were not large. However they were perfectly formed and very friendly, and we were a lot happier with our JSA Mark II. We really like doing this show now, and we have found our perfect tech match with our friend Jen Smethurst. You can next see the full version of Sh!t Theatre's JSA (Job Seekers Anonymous) in Camden in January 2013. Roll on 2013, it's been a hard year.


BBC
We also played at the fantastic BBC Time warp party at Theatre Delicatessen last week, curated by the Stamp Collective. The line-up was great and we were really impressed with the whole night. We had some problems with our set, in that we had written a bit for the evening that was mostly mumbling. Hilarious mumbling, but mostly mumbling, and we ended up on the bar stage with 1 mic between 2 vocals & 2 instruments, so nobody really heard us. Also we may have pissed off some radio people with a joke about the radio. It was a joke! We love the radio! I've heard 'Round the Horne' at least twice this week because my alarm is set to 4 Extra. This morning there was a Tony Hancock show about an eating competition. Obvs I would rather wake up to Man Vs Food, but when you don't have a TV you have to settle...

that's a Sh!t Theatre Radio/TV joke for all the fan out there.


We cut our set short and ran off a bit, then we got very drunk and it was all fine. You need those kind of nights so you can tell a self-deprecating story to Jonathan Ross when the BBC inevitably comes calling. We're hoping that Theatre Delicatessen, Stamp Collective and all 200 people who were in the audience got very drunk as well, so they can forget the sh!t Sh!t and have us back in the new year.


BAC
We've been in rehearsals this week at the BAC with Tim and Norman (who is an actual actor and will be playing Stu). We're working towards the scratch of Burger Van which we'll be presenting on December 7th at the BAC. Really excited about this project and we're enjoying the rehearsals, doing a lot of improv and talking, and tomorrow we start work on the puppets. More info about the play here:
http://scratchr.net/burgervan/2012/11/07/freshly-scratched-application/#comments

IMPROV
Both our teams 'Pilots' and 'The New Happy Squad' are playing this week. We can't make Thursday's gig, but if you are in South London, head on over to the Priory for some top class long-form improv. We will be doing  the Sunday show at the Wilmington Arms this week with Pilots, £4 on the door, the show features two Wilmops house teams (including us) + two Harolds by Improv guru David Shore's class teams.


TONIGHT
Free comedy & performance with Sh!t Theatre present: Other People's Sh!t at Press Play House! It's a bit of a ramshackle, new material, BYOB night, featuring Sam Quinn, Heather Bandenburg and Phil O'Shea (incuding a Sh!t O'Shea collaboration) and hosted by Sh!t Theatre. Starts at 8pm - free comedy and fun and beer (if you want) on a Wednesday!


Posted by Sh!tTheatre at Wednesday, November 28, 2012 No comments: 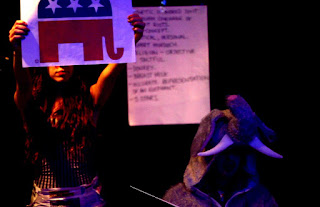