SH!T THEATRE ARE: LIVE AND UNPREPARED AND UNDER-REHEARSED AND ILL-INFORMED FOR SHUNT NEW YEAR'S EVE PARTY 2010-2011!

Come and see in the new year with SH!T THEATRE!
Posted by Sh!tTheatre at Friday, December 31, 2010 No comments:

Many happy returns to all good men and Jesus on this the first day of the Passover. As tradition dictates, Lou and I are sitting in a room, complaining about things and eating other things Karim or Ruth have in the fridge. Too late Ruth! You're not here now!

We're winding down during the festive season, but stay tuned in the coming new year for exciting AiR Supply events. We recently had some meetings and bloodee bloo and we have arranged an AiR Supply event at SHUNT in mid-February! http://shunt.co.uk/. Sh!t Theatre are very excited about this, and will be again part of the organising team as well as performing. Slick Theatre will not be appearing, despite their apparent eagerness. Look guys, we appreciate you are big fans, but we don't have a huge amount of time on our hands.

In other news, Sh!t Theatre have some interesting music projects in the pipeline. Firstly, the now infamous 'Sh!t Theatre Paedo-Medley' is coming soon to an internet near you.

Furthermore, Sh!t Theatre have started "work" on a Christmas single for release in December 2011. Seeing as how we're not as well known as, for example Bob Geldof or Coldplay or Bing Crosby or David Bowie or that guy from The Beatles or that other guy from the Beatles or Mr Hanky the Christmas Poo or The Pogues, or Slade or Shakin' Stevens or Mud (arguable that one) or The Pretenders or what's that guy that released 'Bo! Selecta'? don't know Louise, sorry, or Elton John or Elvis or or Mariah Carey or Boney M who are bigger than you think or Wham or The Darkness, we doubt this will guarantee us a no.1 hit. However we expect it will be included on some compilations, for which we will at least receive some royalties every year. From now until our deaths.

Using Lou's laptop throws up some interesting title suggestions. The above intriguing 'Re: Marital sleep rape' was my favourite..she's such an enigma you know.. what was that referring to? Just adds to the Mystery of the Mothersole. Other title suggestions included:

'Die hand die verletzt.'
and
'Sandwich day joke help.'
To Business - Thanks to all who came along and made last week's run of performance and stress super fun. World AIDS Day, Balls to Xmas and AiR Supply's 'Launch' were all great, and though Sh!t Theatre may have been out of tune or drunk or both at some *all* of them, the audiences seemed to enjoy it. World AIDs Day Extravaganza featured a mighty pub sing-a-long and a 3am snowball fight; at 'Balls to Xmas' at the The Resistance Gallery, we were coaxed into a Christian AIDS -followed-by Burqa King set and then Garry got pissed and sang us some lovely carols while we fondled the artists' balls; 'Launch' managed to entice over 60 people through the door despite extreme weather conditions and competing Friday night shenanigans, and Louise and I got smashed and pulled some pretty sweet moves on the dance floor after a performance of Christian AIDS/Free Schools. Hurray!  I also previewed 'What I Know About Wine So Far' which, thanks to Lou and Ruth's editing/advice, was great fun to perform as well.
Coming Soon:
AiR Supply upcoming events!
By the way, if any of our many followers hear about a Sh!t Theatre tribute band, please let us know. There are whispered rumours of a soi-disant 'Slick Theatre' galivanting around imitating us, and we would like to put a stop to it.
'Launch' Photos by Lauren Davis 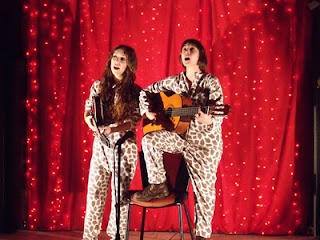 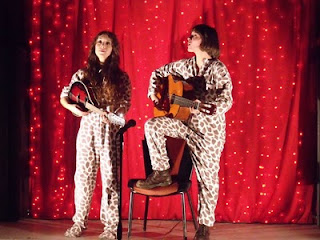 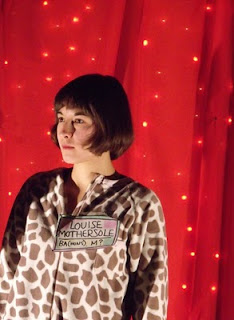 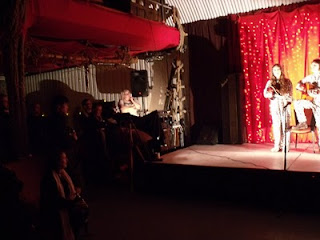